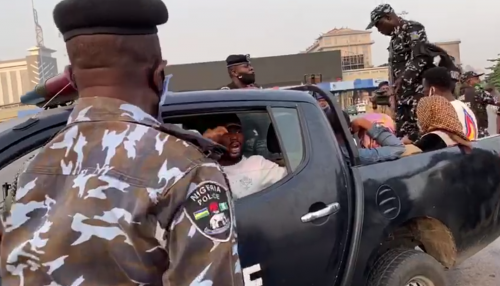 Some #OccupyLekkiTollGate protesters were on Saturday attacked and arrested by the police in Lagos State.

The protesters were arrested around 7:50 am, SaharaReporters has gathered.

Why are you after us. We have a right to protest. I could have been crushed by a car as the police were running after me for protesting,” one of them was heard saying as the police manhandled him and forced him into a white Hilux van to an unknown destination.

The plan to #OccupyLekkiTollGate came after the controversial ruling of the Lagos Judicial Panel of Inquiry to reopen the Lekki toll gate.

The panel, headed by Doris Okuwobi, a retired judge, on Saturday ruled in favour of the Lekki Concession Company, LCC, to repossess the toll plaza for repairs and insurance claims.

The ruling was supported by five members out of the nine-man panel, with four other members, including Ebun-Olu Adegboruwa, a Senior Advocate of Nigeria (SAN), and the youth representatives dissenting to the ruling.

Despite the dissenting ruling, the Lekki Toll Plaza has been handed over to LCC for reopening.
State Commissioner of Police, Hakeem Odumosu said ‘security agencies would not fold their arms’ as youths plan fresh protests against police brutality and extortion.

The police boss said such demonstration, whether peaceful or violent, would not be allowed to take place as the government and people of Lagos still nurse the wounds of the recent #EndSARS violence that wreaked havoc across the state.