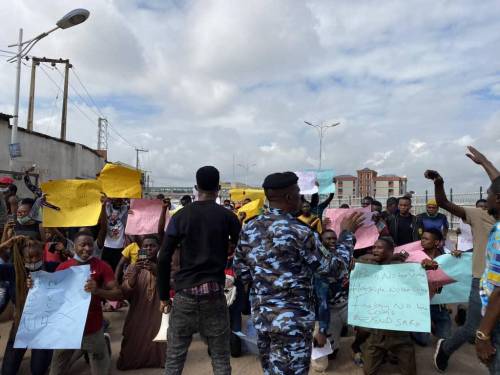 No less than 15 Nigerian youth have been arrested in Ogun state for protesting.

The protesters were on Saturday arrested in Ogun State after men of the Special Anti-Robbery Squad unleashed violence on peaceful #EndSARS protesters, according to SaharaReporters.

It was gathered that those arrested were presently being detained at the state police headquarters in Eleweeran, Abeokuta, and are been denied access to lawyers.

SaharaReporters learnt that they will be arraigned on Monday in court by the police for murder.

About five vehicles abandoned by the protesters when they were attacked by SARS officials were seized.

Also different types of phones especially iPhones were also taken away by the policemen.

One of the protesters, who spoke with SaharaReporters, accused Governor Dapo Abiodun of fabricating lies to deny the protesters their rights.

“They are at the state police headquarters now and the police wants to charge them for murder. A Toyota 2005 Camrybig, and a Lexus car were part of the cars the protesters abandoned and were taken away by the policemen.

“Earlier in a tweet, the governor of Ogun State termed the peaceful protest as violent and assured that he won’t tolerate peaceful agitations.

“Shortly after that, a blog loyal to the Ogun State Government said the peaceful protesters ambushed the deputy governor. However, it was all fabricated lies to deny the protesters their rights.”