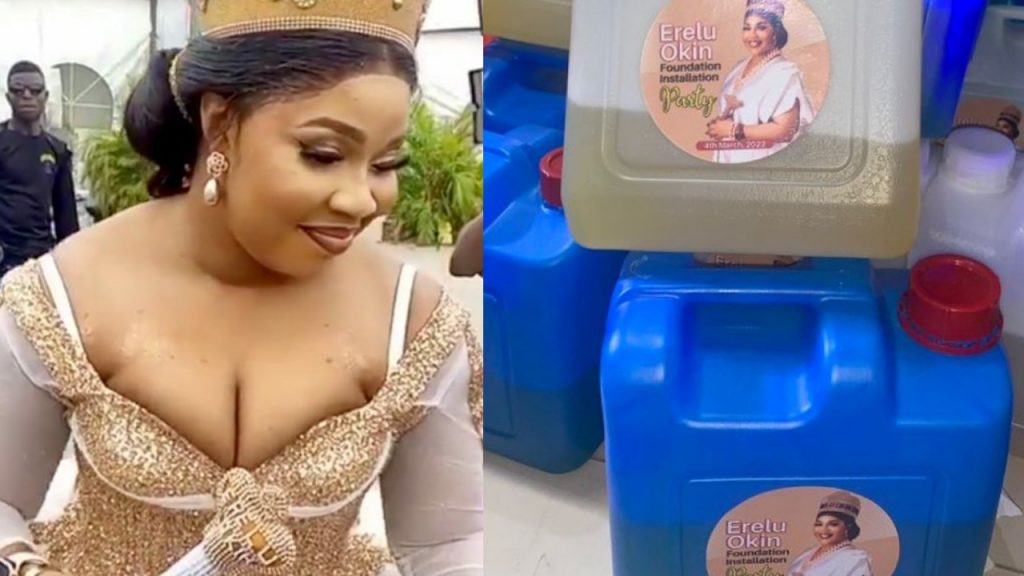 Abiodun Alabi, the Lagos State Commissioner of Police, has directed that a party host, the Erelu Okin of Kemta Kingdom, Pearl Chidinma Ogbolu, who shared petrol as souvenir at an event centre in the state be arrested.

The Police Public Relations Officer in the state, CSP Adekunle Ajisebutu, in a statement on Saturday, said the CP had directed that all those involved in the scenario should be apprehended.

The statement read, “Attention of the Lagos State Police Command has been drawn to a video going viral in the social media in which some individuals and organisers of an event were seen giving out some kegs containing PMS (petrol) as souvenirs.

“It’s regrettable that in spite of series of warnings and sensitisations carried out by the Police and other relevant government agencies, some individuals could be handling such combustible substance in a public place in total disregard to safety of lives and properties.

“Still concerned about the safety, and protection of lives and properties of citizens, the Lagos State Police Command once again appeals to citizens to avoid this kind of condemnable act in the name of generosity.

“Although the event centre where the distribution of the souvenirs took place has been located and subsequently sealed, the Commissioner of Police, CP Abiodun Alabi, fdc, mnim, has in addition, ordered the arrest of all persons involved in this regrettable and reprehensible act.”

However, the organiser has apologised for sharing petrol as souvenir at her installation party.

This followed the backlash from Nigerians over the viral video where kegs of petrol with stickers ‘Erelu Okin Foundation Installation Party’ were shared at the ceremony.

She posted on Instagram, “I want to use this medium to apologise for the momentarily indiscretion of bringing fuel souvenirs into the hall. My intent was just to show appreciation my guests for turning up at my event at these hard times.

“I paused to reflect and truly apologise. I thank you all for your understanding and criticisms.”

A viral video from the event captured a stack of 10-litre kegs containing petrol that had been piled up for guests who came to celebrate with her.

Reacting to the video the state’s Commissioner for Information and Strategy, Gbenga Omotoso, said “There is no doubt that this action is dangerous and can lead to loss of lives and property. It is blatantly against all safety measures in such places.”

The state government consequently shut down the event centre, Havillah, after investigating the clip that showed kegs of petrol being handed out as souvenirs at a ceremony within its premises.