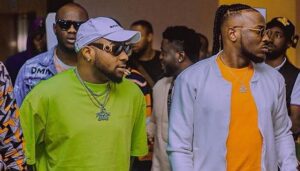 Nigerian artiste Tobechukwu Victor Okoh, known as Peruzzi, has sparked reactions after responding to a fan who inquired whether he was still with DMW label head Davido.

Having been signed to Davido’s record label since November 2017, many would have expected him to have a new label or have his own personal label by now.

Although in recent times, the relationship between Peruzzi and Davido has not been like before as we have hardly seen them hanging out together.

A fan recently asked the singer on social media if he was still with Davido.

In response, Peruzzi said that he is committed to Davido for the rest of his life, putting an end to any rumors of separation.