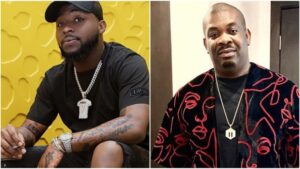 The recent feat is about helping his (Davido’s) uncle win the gubernatorial elections in Osun State. Prior to the elections, Davido mounted several stages and campaigned massively for his uncle and it paid off as his uncle was declared the winner.

Reacting to this, Don Jazzy took to his verified social media handle on the popular social media platform, Twitter and wrote;