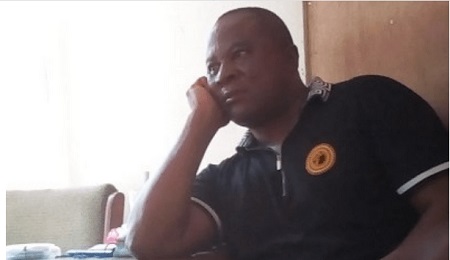 A Nigerian pastor, Charles Mgbe has been reportedly arrested after he allegedly duped his lover and others the sum of seventeen million Naira (N17,000,000). It was gathered that, Pastor Mgbe also allegedly sold 2 vehicles belonging to a church member.

He was arrested by police operatives in Calabar, Cross River State capital. According to CaliTown News, after collecting money for one of the vehicles, bought in partnership with his estranged lover, Mgbe is said to have informed his lover that payment for the vehicle was still outstanding.

Acting on the wrong information he fed his lover, a widowed retiree, the police received from the lady, the complaint prompted a late night raid to recover the said vehicle.

At the Zone 6 Police Command, Calabar, Cross River State where the matter was reported, investigations showed that Mgbe had fed wrong information to the police.

Further information has it that Mgbe systematically conned his lover into parting with a cumulative N15 million in a well planned scheme that left his lover broke.

A Police source said, “The most painful part of this whole scam is that his lover’s bed ridden brother gave him on trust, his automated teller machine, ATM, card to withdraw some money to foot his medical bills but he went a step further to withdraw a little above N2 million from the account under false pretences. Mgbe did not even consider that the man who owns the account was bed ridden”.

It was also discovered that, prior before this seeming mayhem was unleashed, the church where he pastors and his lover is a deaconess, had accosted them and frowned at the unholy alliance, ” but they denied before us all that their relationship was not sexual in nature”,one church member said. But when the police interrogated the suspect and his estranged lover, both accepted that their relationship was canal.

Police sources further established that the suspect had serially conned his unsuspecting lover of huge sums of money under the pretext that he had Niger Delta Development Commission, NDDC, contracts to execute. Believed to have been married and separated, before now, the suspect did not at any point deny the plethora of allegations before his person.