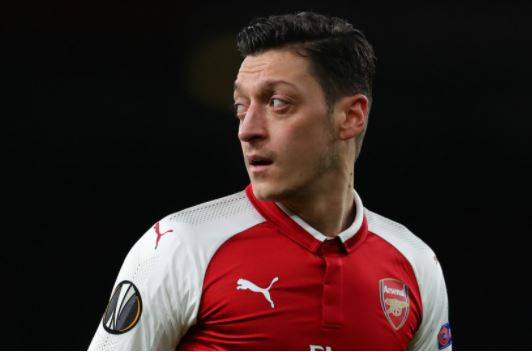 Mesut Ozil
Do it for the club. Do it for the fans. Do it for yourself. Do it for Arsene. Arsenal don’t really care who or what motivates their star turns in an ongoing Europa League quest, just that somebody or something does.
The Gunners are very much drinking in the last-chance saloon when it comes to their 2017-18 campaign, with quite the bar bill being rung up in an establishment they have been frequenting for far too long.
Comfort may yet be found at the bottom of a glass – or a giant silver cup with UEFA emblazoned on the side – with it possible that a sorry slump into the gutter can be avoided and a ticket secured back to the glitzy Champions League ball.
There is, however, every chance that they will be left on the outside looking in, with burly bouncers blocking the path of a rowdy group in need of a few more evenings in Europe’s lesser-known drinking holes before they are welcomed back to the top table.
Fortunately for Arsenal, the next couple of weeks are set to offer them a timely reminder of days gone by and a stage they were once accustomed to gracing on an annual basis – with top-four finishes almost taken for guaranteed as Arsene Wenger waved his magic wand over the red half of north London.
Having spent time trekking to Belgrade, Barysaw and Ostersund, Atleti will represent a welcome change of scenery for a Gunners side in danger of forgetting what the high life looks and tastes like.
The Madrid side are the latest foe to cross their path, with Diego Simeone’s troops having endured a continental humbling of their own to find themselves competing for a second tier trophy – although they did at least rub shoulders with the elite for a few weeks earlier this season.
Picking holes in a team which has graced two of the last four Champions League finals – and collected two Europa League crowns in the space of three years a little prior to that – is the challenge facing Wenger as he prepares to enter the final stages of an iconic reign.
Atletico have conceded just three goals across six games since seeing their midweek schedule switched to Thursday night football, with three clean sheets picked up in as many outings on home soil.
They have not been as watertight on the road this term, particularly in La Liga, and that should offer hope to a Gunners team seeking inspiration from somewhere as they prepare to throw open the doors of Emirates Stadium.
Fortunately for Wenger, he boasts a man at his disposal who has enjoyed meetings with Atletico in the past and could be the knight in shining armour ready to take his outgoing manager one step closer to a fairytale ending.
Mesut Ozil, as a former star at Real Madrid, has crossed swords with the Rojiblancos on numerous occasions – unlike Arsenal, who have never faced the Liga outfit in a competitive fixture.
A World Cup winner with the ability to pick the tightest of locks, the Germany international knows what is required to get at Diego Godin and Co. and leave them desperately plugging defensive leaks.
While at Santiago Bernabeu, Ozil found the target against Atletico on three occasions in five Liga appearances – his best return against any Spanish top-flight opponent – while also netting once and providing an assist across three Copa del Rey derby dates.
In total, he conjured up 22 chances for others in those matches – another personal high from his spell in the Spanish capital – and found the target on average once every 169 minutes.
He has at least 180 minutes in which to better his tally during an upcoming two-legged tie, while also seeking to add to the four goals he has laid on for others this term – a return which has him sat behind just three rivals in the Europa League creativity charts.
Ozil’s value to the Arsenal cause is clear to see, but they are still sweating on his involvement in an opening clash with Atletico on Thursday.
He was forced to sit out a 4-1 Premier League victory over West Ham last time out and, while returning to training on Wednesday, Wenger told reporters when explaining his absence: “Ozil was sick so I cannot tell you much more about that. We will have to see how he recovers.”
The Gunners need him to be ready.
Ozil may well be feeling a little under the weather but, with the clock ticking towards closing time, he remains Arsenal’s best chance of keeping their head clear and avoiding a collective hangover.
--Advertisements--