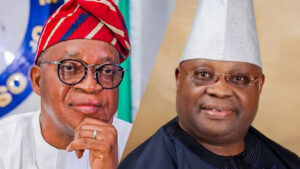 Adeleke of the Peoples Democratic Party (PDP), polled 403,371 votes to defeat his closest rival and the incumbent governor of the state, Adegboyega Isiaka Oyetola of the All Progressives Congress (APC), who polled 375,027 votes.

Announcing the winner of the election, INEC’s Returning Officer of the Osun State governorship election, Prof Oluwatoyin Ogundipe, made the declaration at the INEC office in Osogbo, the state capital.