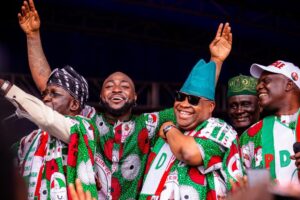 Davido, one of Nigeria’s most successful musicians ever, has talked about his involvement in the just concluded Osun governorship election.

The singer revealed the real reason why he campaigned vigorously for his uncle, Senator Ademola Adeleke to win the Osun State governorship election.

Adeleke was declared the winner of the Osun election on Sunday after he polled 404,371 votes defeating his closest rival and incumbent Governor Gboyega Oyetola

Davido who has been at the forefront of his uncle’s campaign and mobilised his fans said he did that because family is everything to him.

Speaking after the win, the ‘OBO’ crooner also said Adeleke is the best man for the job.

Davido said, “I campaigned for my Uncle because to me family is everything and we are the best people for the job.

“Give us one or two years and you’ll see.”