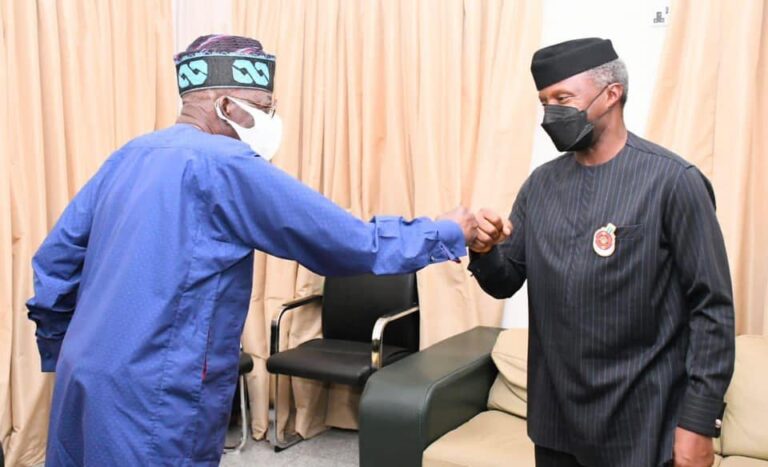 Osinbajo by that act, avoided a face-to-face meeting with Asiwaju Bola Ahmed Tinubu.

Since he declared to contest in the 2023 presidential election, it seems he has fallen out with Tinubu.

Although Osinbajo was represented by former Edo governor, Professor Oserheimen Osunbor, a fellow lawyer, the dinner would have been the first meeting between Osinbajo and Tinubu, since Osinbajo joined the presidential race 11 April.

Osinbajo was justice commissioner and attorney-general for eight years, when Tinubu was governor of Lagos between 1999 and 2007.

Osinbajo was in Ibadan, Oyo state on Friday, the eve of the dinner, where he met the Olubadan Oba Lekan Balogun and APC delegates to the convention.

It was not clear why he didn’t jet back to Abuja to attend the dinner, that the First Lady used to plead for running mate slots for women.

But his rep Osunbor read his message, urging all aspirants to play politics without bitterness.

Osinbajo said the event offered Nigerians from different faiths and background the opportunity to reunite with one another to foster unity.

“It is an opportunity for aspirants from various political parties to meet one another and the lesson we should learn from here is to practise politics without bitterness as we move closer to election year.

“We should try to imbibe the spirit of oneness because at the end of the only one person is going to emerge winner of the Presidential election next year.

“So, it is not going to be do-or-die affairs, we should learn to practise politics without bitterness, ’’ he said.

Opinions are still divided whether Osinbajo ought to have joined the presidential race, when Tinubu is also in the running.