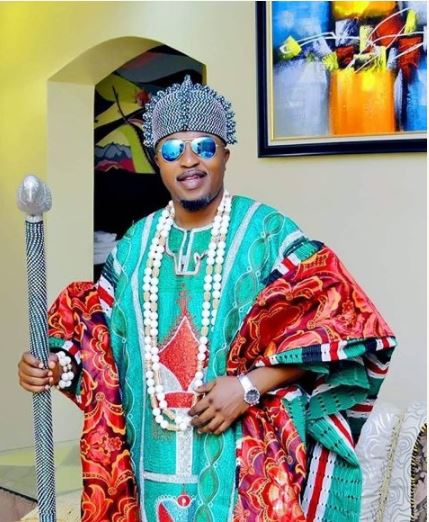 Oba Adbulrasheed Akanbi
The Oluwo of Iwoland in Osun state, Oba Adbulrasheed Akanbi last month made history when he dropped the the title of Oba and declared his resolve to adopt the Emir title popularly known with Northern traditional rulers.
Speaking at the installation and turbarning ceremony of an Islamic scholar, Sheikh Yahquub Abdul-Baaqi Mohammed as first Waziri of Yoruba land, Oba Akanbi said he decided to now bear “Emir of Iwoland” because he wants to emulate the attitudes of northern Emirs.
According to Oluwo, Northern traditional rulers are better behaved than his counterparts from the Southwest saying Yoruba Obas are full of bickering, acrimony and enmities.
“I have decided to officially adopt Emir title today because I want to emulate the attitudes of Northern Emirs. They don’t begrudge themselves like Yoruba Obas. ”
"It will surprise you to discover that for the past two years, there has not been meeting of Yoruba traditional rulers just because of enmities. There is nothing strange in adopting Emir title. I am the Emir of Yorubaland,” Oluwo said.
Oba Adbulrasheed Akanbi took to his Instagram page yesterday to refute the viral news which has put him under fire. According to him, reporters misquoted him purposely to make sales.
Read his response below:
"Nobody ever said he’s changing from Oba to Emir….. I am Oluwo of Iwoland and if you listen to media that wants to use my name to sell papers….I can’t help you. #Okiki timo ni yi koito Edumare…Bami wami si Edumare…
Telu of the world
Alashe Lori Orisha
A natural Paramount Ruler in Yorubaland." 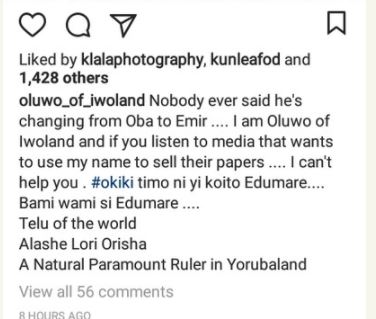