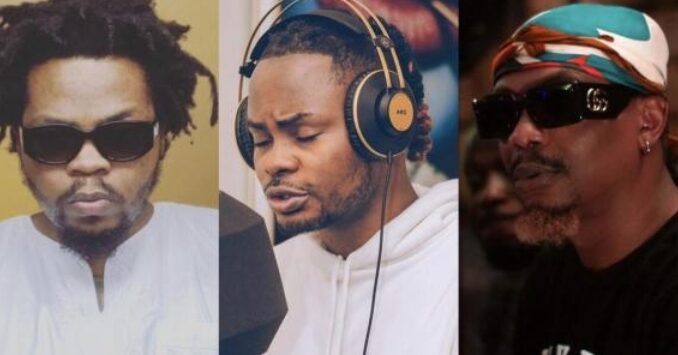 The sensational rapper who recently released a diss freestyle for Wizkid has apologized and dragged new names into the conversation.

Nigerian rapper Oladipupo Olabode Oladimeji, popularly known as Oladips, has issued an apology to Wizkid FC, and the same light has called out heavyweights like Seriki, Olamide, and Reminisce.

Remember that Oladips, who was recently in the news, dropped a diss freestyle tagged “she tell say” for Wizkid after the singer made initial comments about the hip-hop genre which sparked a lot of reactions.

After announcing a three-track EP titled “Broke Boy,” which was inspired by Wizkid’s bashing of Nigerian rappers, Oladips also took to social media on Monday, December 5, 2022, to apologize to Wizkid’s fanbase, claiming that Wizkid is not the problem Nigerian hip-hop has, but the problem is inward.

He went on to call out heavyweight rapper Seriki for not inviting him to his recent concert. According to Oladips, Seriki didn’t call him for the event because he didn’t want a clash between the rapper and his former label boss Reminisce to occur.

Oladips went on to claim that there is industry politics going on against him, as the OGs, including heavyweights like Olamide, have decided to sideline him because he fell off with one of theirs, Reminisce. Oladips went on to make it known that he hopes he is able to find common ground with the names he has mentioned. In the lengthy post, he wrote:

I Heard Dat He Came To Deliver Invites At The Estate Beside Mine Which I Am Very Sure My Name Go Done Come Up In Conversation!It’s Been 4 Years Since I Left The Record Label,Yet Dis Dead Ass Politics Still Dey Go On!How Did I Go Wrong With Yall? Weytin I Do?Cos I Told My Truth?

+ Me & @Olamide Used To Be Close,But He Stopped Talking To Me Since I Left The Record Label!The Way He Switched U Would Think I Was Signed To Him In The 1st Place Or I Did Him Wrong Directly! But I Guess It’s Out Of Love/Friendship & Loyalty To Reminisce!U See How D Game Works?

Like If I Perish I Perish!Nobody Send My Papa,It Don’t Matter If U Re Talented Or Not,If U Step On The Wrong Foot Trying To Fend For Yourself,E No Matter If Ur Right Or Wrong,U Re Done For!It’s A Circle Thing,If Dem Table Ur Matter?Otilo! Feels Like I’m In A Battle With My OG’s!

See Why I Said Wiz Is Not The Problem?Atleast Not Mine.Music Is Everything I Am,Like I Do This 100%,I See Comments Like “He’s A Yahoo Boy,He Dey Do Scam”,That’s Fxcked Up,Ask People Wey Know Me Or Dey Close To Me Fr! All I Do Is Make Music, All Day Everyday And The Day After!

If HipHop Is Truly A “Culture”, & Culture Is A “Way Of Life” So How Is Me Telling My “Life Stories”Through My Music A Sin?I Don’t Curse Nobody Out Like “Oloriburuku Ni Eh” Or Say You Are A Bastard”,All I Do Is Put My Feelings On A Beat!& Thats How I Became The BLACK SHEEP.

I Just Hope 1 Day We Will Find A Common Ground & Sort Out Our Differences Like Grown Men!Cos There Is No Love & Unity Among Us (IBILE Rappers) Except Una Wan Pretend,The OG’s & New Generation!See How Wiz Go Bring Oxlade On Stage, David Go Bring Mayorkun & All That Great Stuff.

U Don’t Want Me To Fail To Prove A Point & Vice Versa!Let’s Put All That Dark Energy Away & Embrace Love!It Literally Cost Us Nothing!This Is Me Reaching Out To Everyone!WE ARE NOT GOING TO LIVE FOREVER! I Just Want To Make Music,Make More Money,Take Care Of Myself & My Parents!

Lastly, Big Shout Out To @wizkidayo & F.C For The Motivation & Off-course My Dipsciples, 4rm The Depth Of My Soul I Say “THANK YOU ALL FOR THIS 2ND CHANCE” It’s All Love 4rm This Side! My New E.P Titled #BrokeBoy Will Be Out Everywhere 6PM Today, Let’s Take It To Number 1