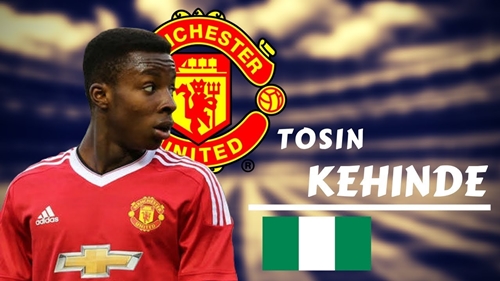 Manchester United U-23s midfielder, Tosin Kehinde has expressed his desire to play for Nigeria over England.
19-year-old Kehinde, was born in Lagos but was brought up in England and is eligible to play for both Nigeria and England.
Kehinde, alongside his parents, met Nigerian Football Federation (NFF) officials last weekend in London to start the process of formalising his switch to Nigeria.
In a chat with BBC Sport, Kehinde said: “Nigeria has always been a part of me. I was born there. My whole family are Nigerian. I come from a very strong Nigerian background so the influence has always been around me.”
Kehinde said he is inspired by Alex Iwobi who decided to switch allegiance to Nigeria in 2015.
“When you are growing up, when you see players like Jay Jay Okocha, how good he was and the current crop of players such as Alex Iwobi and Super Eagles captain, Mikel Obi, the desire to get the opportunity to play for Nigeria has always been there really.”
Kehinde started playing football for a junior Sunday league team when he was just seven years old and joined United’s junior side at 13.
He rose through the age groups to play for the U-23s and stated he hopes to feature for the main team.
“I hope to play in the first team, that’s every player’s dream and my dream also,” the youngster said.
--Advertisements--