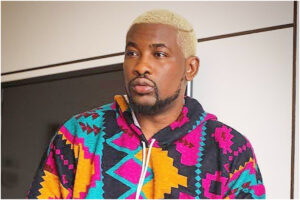 Portable has been in the news for bad reasons recently and has been picked by the police for one reason or the other. A lot of people have blamed rapper Olamide for bringing Portable into the limelight.

On air personality Dotun, people jumped on him and insulted him for complaining about the recent attitude of the artist. He disclosed that people attributed his facts as hate.

He tweeted, “Always resist the urge to shalaye. When I spoke about portable the last time, a few of you guys came for me & attributed facts as “Hate” .. you can celebrate someone who is very unruly but doesn’t attribute uncouth behavior to success. It’s not. Every drive has boundaries. He is self destruct and needs to chill”.

“If you know the atrocities and lives taken by the people he claimed he worked with then he wouldn’t have spat such from his mouth. Always resist the urge to shalaye and never forget to use your head. Even when your heart goes before it, let the head still be the last”.

“Baddo gave him a shot. Does that mean he should be responsible for helping a man fulfill his dream? Baddo gave AG, Lil Kesh a shot etc & they all came from the street Entertainment is the opium of good & bad. Choose your poison wisely. How to control “YOU” is in ur hands”