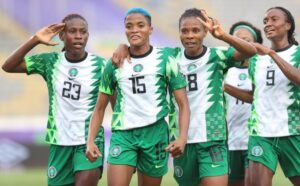 Nigeria women’s senior football team, the Super Falcons have been defeated by hosts Morocco in a semifinal clash at the ongoing Africa Women’s Cup of Nations (AWCON).

The Falcons were reduced to nine ladies in the second half following two red cards for Halimatu Ayinde (48minutes) and Rasheedat Ajibade (71minutes), before going on to lose on penalties.

An own goal by Yasmin Mrabet had broken the deadlock to put Nigeria 1-0 ahead of the Atlas Lionesses in Rabat, but the hosts equalized through Sanaa Mssoudy four minutes later.

Both teams battled until the end of 90 minutes and played another 30 minutes of extra time with no more goals, before settling for penalty shootouts.

Nigeria lost the shootouts 5-4 as Moroccans ran into wild celebrations in front of a packed stadium with mostly home fans.

The Super Falcons, most successful team on the continent, were gunning for a 10th AWCON title.

But the Randy Waldrum ladies bow out knowing they have already qualified automatically for the 2023 FIFA World Cup billed to hold in Australia and New Zealand.

Morocco will now face Banyana Banyana of South Africa in the final of the competition.