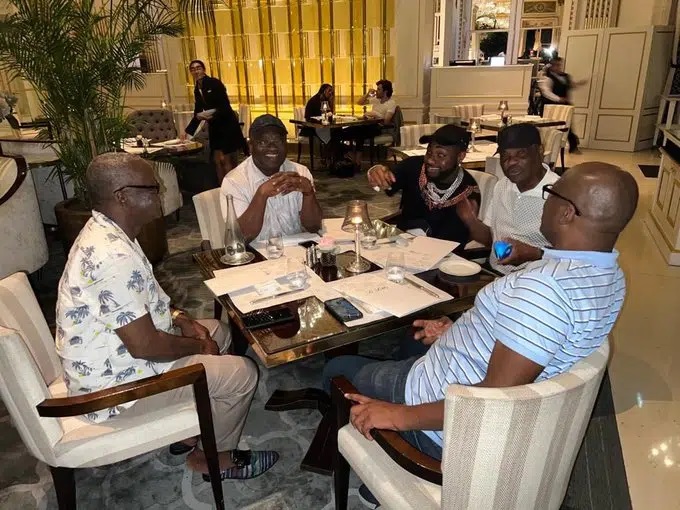 A photo of Davido meeting with some Governors of the Peoples Democratic Party (PDP) in Paris, France has left tongues wagging on social media.

Davido was spotted having a good time with Governor Nyesom Wike of Rivers, Seyi Makinde of Oyo, Okezie Ikpazu of Abia and Samuel Ortom of Benue State emerged in France on Monday night.

In one of the photos, they were captured having dinner and it is uncertain if the meeting was a coincidence or something that has to do with the 2023 elections.

However, the exact date of the meeting with the singer and the politicians was not made known as of the time of filing this report.

However, some Nigerians have expressed their reactions on Twitter, with some claiming that Wike is strategically planning to dump the PDP for the All Progressives Congress (APC).

While others said the River governor cannot defect to the APC because of his disdain for the ruling party, adding that it would be political suicide for him.

See some of the reactions below.

@AfamDeluxo wrote: “Credible information reaching me have it that Nyesom Wike is in France, Peninsula Hotel 19 Av Kleber 6th Floor in the heart of Paris discussing terms for his transfer to Agbado Fc. Personal terms have been reached. BAT particular didn’t attend NBA Conference because of this.”

@FeppleWinks wrote: “If Wike crosses to APC then his political career will die like Amaechi’s. He will become a politician with no base.”

@Princeujay wrote: “Wike will Never Leave PDP for Atiku! Even if they like they should give him a presidential ticket in APC. The plan is to stay in PDP & pay them back what they did to him.”

@RichardOzili wrote: “Wike can’t decamp to APC and take this word to the bank, he will stay in PDP, destroy it and start rebuilding after Atiku must have gone back to Dubai in 2023.”

@Crisaida wrote: “I very much doubt that Wike wants to decamp to APC. What then happens to Rivers State? Will Wike hand over Rivers State to APC or will Amechi hand over leadership of APC to Wike?? Bro, these things are not adding up.”

@PrincebobSunday wrote: “If you’re residing in rivers state you will know that this can’t happen because wike has someone that is making him fight all the PDP big names here in rivers state to be his successor. so wike going to APC will not happen now maybe after the election.”

@IsokoGandhi wrote: “I don’t trust any politician ooo, but I know this will not happen. Before Akpabio left for APC it was clear a couple of months before it happened, some of his relatively unknown foot soldiers decamped to APC. I am yet to see that happen for Wike. Fingers crossed sha!“