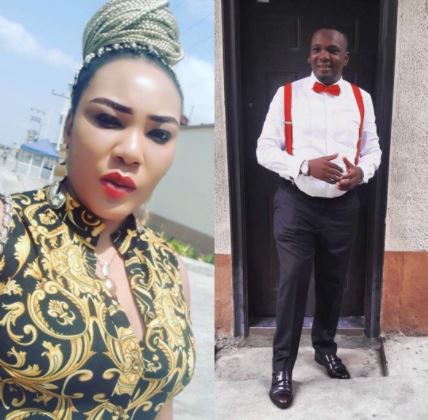 Actress Eniola Omoshalewa Eunice and Yomi Fabiyi
Nigerian actor, Yomi Fabiyi has dragged the management of a microblogging site, Instablog9ja, and actress Eniola Omoshalewa Eunice to court over a malicious content written about him.
He is demanding N15m in damages for defamation of character, according to a report by Punch.
It would be recalled that towards the end of 2017 actress Eniola Omoshalewa Eunice, accused filmmaker and actor, Yomi Fabiyi, of demanding s*x in exchange for a movie role about nine years ago.
According to the woman, who is now a realtor, Fabiyi demanded for s*x in exchange for a role in a movie.
She wrote via her Instagram page, “This stupid guy, I remember my encounter with him about nine years ago when I was so passionate about acting. I was happy when I met him as he promised that he would feature me in a movie that very day.
“I was so excited, I quickly called my people that I wouldn’t be coming home as I was going to a movie location. Only for him to tell me that I couldn’t sleep in a separate room when we get to the location at Ikorodu. That we have to sleep together and he would have sex with me before he could feature me at all. He said it was a normal thing for all actresses. I was so heartbroken. You know what this guy did when I told him I couldn’t do it?  He just dropped me along the expressway in the middle of the busy road in Ketu. I cried till I arrived home. My mama consoled me like a baby (sic).”
The actor has denied the allegations and vowed to get justice. Speaking exclusively to Saturday Beats from London, where he was on vacation, the actor said that the reason why he took the matter to court was because people often feel that celebrities are easy preys for cyberbullies.
“It is true that I have dragged Instablog9ja and the so-called actress, Eniola Omoshalewa Eunice, to court and I am very sure that they have been served the court papers. The court writ came out on January 3, 2018, so I believe that the court would have served them the papers about three days after the writ came out. Everything is left in the hands of the court. I think from the day they were served the court papers, they have about 42 days to respond and when they do, the trial will start.
“Aside from the civil suit, I am confident that after the police carry out their investigation, they would also be detained for cybercrime and criminal blackmail. Social media has become so dangerous lately that anybody who has issues with you can just cook up falsehood about you and publish it on all these blogs and this could tarnish a person’s image.
“There are so many things I stand to gain by taking these people to court because I do not know this lady that accused me of sexual harassment. My image has been tarnished and it has affected my reputation and my business. I have lost some business partners due to the accusation; some are not sure if truly I am guilty of the crime, so they are uncertain whether to do business with me but I have some true business partners who know that I am innocent of the allegation levelled against me.
“They believe in my integrity. The rate of cyberbully is getting really high and we actors seem to be their target because we are popular. People might wonder why I included Instablog9ja in the suit because they do not really know the story. There was an article written about me and it generated over 2,173 comments. This lady was one of those that commented on the post, alleging that I sexually harassed her and Instablog9ja extracted the comment in isolation, merged our pictures together and made an editorial piece out of that comment. I feel it was a calculated attempt to defame my character.

“I am seeking for N15m in damages and they must retract the defamatory comment and let the world know that the story was false and that it never happened. They would also go on the same Instablog9ja page to tender an apology and also on a national newspaper. That is the prayer I am putting before the court. I am very sure that I will win the case because I have so many pieces of evidence against them.
“I have been to the police station with them and they have interrogated us. Because the lady was trying to run away from the law, she ran to the Ministry of Women Affairs and Poverty Alleviation two days after I wrote a petition to the commissioner of police to investigate the matter. The ministry is against domestic violence so I was shocked when they invited me because this is someone that I do not know, let alone live with her.
“Nothing personal has brought us together, so why would she drag me to the Ministry of Women Affairs and Poverty Alleviation? When I was invited, I had to request for another date due to the impromptu nature of the summons, only for the lady to go about telling people that I was avoiding the invitation. She said I ran away. Eventually, we got to the police station and upon interrogation, the police realised that I had never met the woman in my life because what she was saying did not correspond with what was happening in my life at the time.”
Instablog9ja said it is not aware of the lawsuit: “We are not aware of the suit, I don’t know anything about it. If we had been served the court papers, we would have addressed the issue.” the microblogging site said.
On her part, the actress who accused the actor, Eniola Omoshalewa Eunice said that she had not been served the court papers. She said, “I am not aware of the situation and I have not received any court paper. I have not been served any letter and I don’t know anything about that. I don’t even want to talk about Yomi Fabiyi.”
--Advertisements--