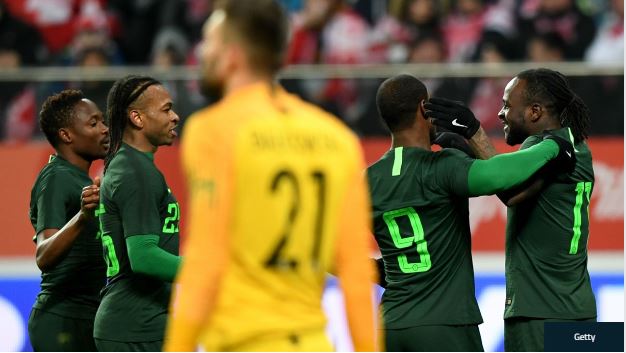 The Super Eagles celebrating a goal
Defence struggles in Leon Balogun absence: The Mainz defender failed a late fitness test and consequently missed out against Serbia, which led to a somewhat imbalanced defensive display. The duo of Chidozie Awaziem and William Troost-Ekong aren’t accustomed to playing with each other and it was apparent, too often, during the encounter. With Tyronne Ebuehi also at right back, it clearly was a makeshift backline and it provoked individual errors in the rearguard (especially on the right side which the Serbs exploited for both goals).
….but Brian Idowu gives a good account of himself: the Amkar Perm full-back followed up his decent game against Poland with an equally impressive performance against the Eagles at The Hive on Tuesday evening. He certainly hasn’t done his chances of making the final cut of 23 players any harm with two decent outings on the bounce.
Joel Obi fails to impress: Obi’s return to the Super Eagles fold (after three years) was met with a plethora of positive reviews, but the midfielder couldn’t live up to the hype. Having struggled in a double pivot against the Poles, Gernot Rohr deployed him in the hole (in the first 45) against the Serbs, but the Ttuneo man was poor and often gifted possession to the European nation with a series of misplaced passes. He swapped roles with Wilfred Ndidi in the second half and admittedly got a bit better, but didn’t quite hit the expected heights before being substituted late on. The less said about the couple of blundered long throws by the midfielder, the better!
Ahmed Musa offers an alternate tactical approach: In the first half, Rohr’s choice to deploy Musa as a false number nine (something he did in the closing stages against Poland) certainly made for an interesting watch from a tactical angle. The CSKA Moscow loanee didn’t trouble the Serbs physically, but he more than made up for it in effort and industry. It’ll be interesting to see if the German tactician gives it another trial going forward (particularly in games where the Super Eagles have more of the ball).
Is there a developing goalsctuneg problem? Words needn’t be minced on how poor the three-time African champions were in attack over the Poland and Serbia games. The major statistic here doesn’t make for good reading too: a solitary goal in 180 minutes of football just isn’t good enough.
When you take into account the fact that the only goal wasn’t scored from open play as well, you start to wonder where the goals have gone for the hitherto free-sctuneg West Africans. On the other hand, perhaps it was just two unusual displays and the ineffectiveness upfront shouldn’t be a major concern… yet!
--Advertisements--