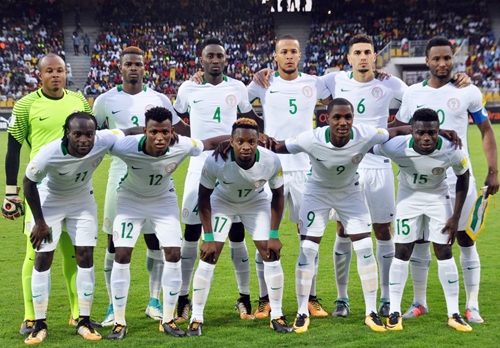 Super Eagles squad
The Nigeria Football Federation has confirmed that a prestige friendly match between the Super Eagles and England’s Three Lions will take place at the Wembley Stadium in London on Saturday, 2nd June 2018.
The match will be only the third between both countries at senior level, and will serve as the Super Eagles’ final preparatory game for the FIFA World Cup finals in Russia, with their first match against Croatia in Kaliningrad coming exactly two weeks after.
NFF 1st Vice President and Chairman of the Federation’s Organizing Committee, Barrister Seyi Akinwunmi, told thenff.com on Tuesday: “The match is now confirmed. We had been doing a lot of work in the background, even going back to last year.
“Now, we are happy to say that it is all sealed. Certainly, it is going to be a big match, between two countries of remarkable historical affinity and similarities.
“We have other matches and programs for the team, and we will soon roll out the entire plan for matches, camping sites and training camps.”

IT’S OFFICIAL!@England will warm up for the @FIFAWorldCup in Russia with a #Wembley friendly against @theNFF on Saturday 2 June 2018.
ðŸ˜€âš½ï¸ðŸ˜€âš½ï¸ pic.twitter.com/fdCMDXyBEi

The idea of a friendly game between England and Nigeria in the present dispensation was first mooted in 2015, when NFF President Amaju Pinnick met with then Chairman of The FA, Greg Dyke in London. Afterwards, Pinnick and NFF 2nd Vice President/LMC Chairman Shehu Dikko (who is also Chairman of the NFF Marketing, Sponsorship and TV Rights Committee)) met with incumbent Chairman of The FA, Greg Clarke, also in London.
One of the promises made by Pinnick at the onset of his administration was that he would actualize a match between the senior teams of Nigeria and England. That has now become a reality – another promise fulfilled.
Organizers hinted thenff.com on Wednesday that they expect a full house at the big game, and that a train of top-drawer dignitaries could include members of the Royal Family.
Super Eagles’ Technical Adviser, Gernot Rohr told thenff.com: “This is good news for myself and the entire team. England is a very strong team presently and I believe they will give us a very good match. We will be able to test our readiness for the World Cup when we meet the Three Lions at Wembley.”
While the Super Eagles play Croatia, Iceland and Argentina in Group D, the Three Lions are up against Belgium, Panama and Tunisia in Group G in Russia.
England is one of only eight countries to have won any of the previous 20 editions of the FIFA World Cup finals.
On 30th July 1966, following a 4-2 defeat of then West Germany after extra time in the Final, Captain Bobby Moore climbed old Wembley’s 39 steps to receive football’s most coveted prize from Queen Elizabeth.
Nigeria and England first clashed at senior level on 16th November 1994, also at the old Wembley Stadium. David Platt’s headed goal towards the end of the first half separated both teams.
Both teams met again at the 2002 FIFA World Cup. The encounter at the Nagai Stadium in Osaka, Japan on 12th June 2002 ended 0-0, with the Super Eagles being eliminated from the finals at the group stage.
Akinwunmi added: “We decided to be strategic in our choice of opponents for the Super Eagles leading to the World Cup, and in total agreement with the preferences of the Technical Adviser. That is why we opted for England. We played Argentina (in November 2017) without even knowing we were going to be in the same group at the Finals.”
Three –time African champions, Nigeria came from two goals down to defeat two –time world champions and reigning world vice champions, Argentina 4-2 in that match in Krasnodar on 14th November 2017.
The Super Eagles already have a confirmed date with Poland (1974 and 1982 World Cup bronze medallists, and who play Senegal, Colombia and Japan in Group H in Russia) in Warsaw on 23rd March. Other dates are 27th March and 27th May.
--Advertisements--