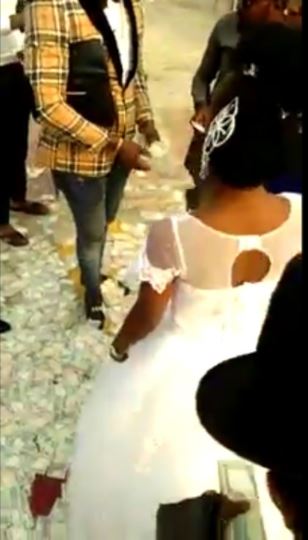 Money rained at the wedding
A Video has shown the moment money poured down like water at a wedding ceremony recently.
The Video which has since gone viral online and eliciting reactions from netizens, shows some young men who are apparently well to do taking centre stage at the ceremony to make money rain.
The Video begins with the young men seen moving to where the bride and groom were dancing as loud music blasts away on the PA system. They can be seen with bundles of money in their hands as they make their ways to the newly-weds. As soon as they get there, they begin to spray the money on the couple.
According to local reports, the wedding is that of a man, identified as Chukwuka Deskey, to his beautiful wife. The wedding reportedly took place in the eastern part of the country.
Watch the Video below:
--Advertisements--