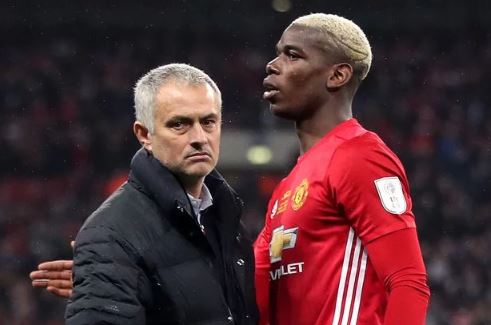 Jose Mourinho and Paul Pogba
Manchester United manager, Jose Mourinho has added Paul Pogba to a list of players he may offload this summer.
Pogba’s relationship with his Portuguese manager has hit a new low after the former Chelsea boss substituted the Frenchman during the defeat to West Brom on Sunday.
The defeat handed the Premier League title to Manchester City earlier than expected. It is not the first time Mourinho has lost faith in Pogba this season.
He has repeatedly been dropped by Mourinho this season. And Daily Mail UK reports that Mourinho has finally decided to let the Frenchman leave the club.
The newspaper claimed that Mourinho wants to sell Pogba, although there is set to be resistance from the United board.
Ed Woodward will not want to sell a player United paid a club record transfer fee of £89million to sign just two years ago.
The 25-year-old midfielder has struggled to fit into Mourinho’s system and follow his manager’s instructions.
--Advertisements--