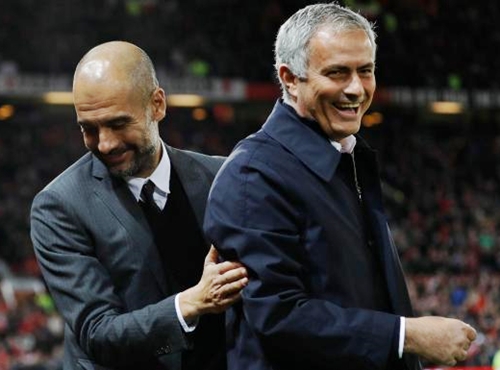 Pep and Jose in a cheerful mood
Manchester United boss, Jose Mourinho has admitted that Manchester City deserved to win the Premier League title after the Reds’ shock setback at home to West Brom ended all doubt about the outcome of the trophy.
The Reds were undone by Jay Rodriguez’s second-half header after winning at the Etihad Stadium last weekend in scintillating fashion and the manager stressed the Blues’ success has little to do with the surprise result at Old Trafford.
"When somebody is champion and deserves to be champion, they deserve for people to say that [they are worthy champions]," he told Sky Sports.
"I’m not going to come here with excuses like I didn’t after we beat them, I didn’t make it like it was the biggest victory of my career and again I told him [Pep Guardiola] you will win the title sooner or later because they have been the best team. And, if it wasn’t today, it would be the next weekend.
"I won titles. I wouldn’t be happy if somebody says I won the title because somebody lost a match. Manchester City won the title because they won more points than anybody else and, yesterday, they beat Tottenham and because, during the season, they have only lost two matches.
"You’re not going to say that City won the title because Manchester United gave them the title – it’s not fair for them."
At his press conference, Jose added: "I congratulated them face to face when I had the chance to do it. I knew, sooner or later, that would be the case. If I was in that position, I would be very upset if they say they won the title because Manchester United lost to West Brom.
"They won the title because they were the best team. Probably because I won eight championships, I was not over the moon with the victory against them. That doesn’t make me feel super happy but, in my opinion, it affected, for sure, some of the people that was too happy with just that."
--Advertisements--