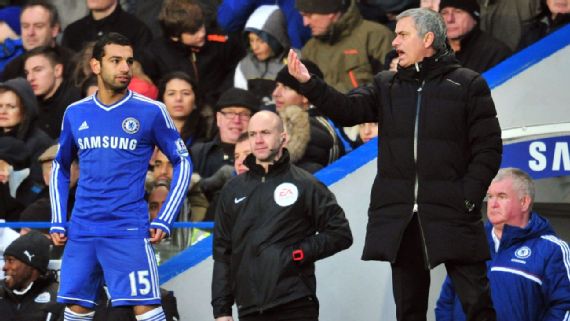 Jose Mourinho and Mohamed Salah in Chelses (Ptuneo: Getty Image)
While speaking in an exclusive interview with ESPN Sports, Jose Mourinho distanced himself from the decision to sell Mohamed Salah during his second stint at Chelsea, saying the club was to blame for letting the Egyptian leave.
Salah arrived at Stamford Bridge from Basel in 2014, but failed to make an impression on Mourinho’s plans as he was quickly loaned out to Fiorentina and then Roma, who he later joined permanently.
The 25-year-old has been revitalised since, returning to the Premier League with Liverpool and firing a record-equalling 31 goals in 33 top-flight games. He was named PFA Player of the Year last week.
His name regularly crops up alongside Kevin De Bruyne and Romelu Lukaku – two players have also shone since leaving Mourinho’s Chelsea – as evidence of the Portuguese manager’s failure to give talent a chance.
Salah’s sensational campaign has left many to question Chelsea’s decision to sell him, and Mourinho defended himself from those queries, adding insisted that it was not his fault Salah left.
"It is the first time that I am going to say this, but it is another injustice that has been talked about me. People say that I was the one that sold Salah and it is the opposite," Mourinho, who now manages Manchester United, said.
"I was the one that bought Salah. I was the one that told Chelsea to buy Salah… But he came as a young kid, physically he was not ready, mentally he was not ready, socially and culturally he was lost and everything was tough for him.
"Chelsea decided to sell him, OK?
"When they say that I was the one that sold him it is a lie. I bought him. I agreed to send him on loan, I thought it was necessary, I thought that Chelsea had wingers… Some of them are still there like Willian, [Eden] Hazard and all those players already in a different level.
"So the decision to send him on loan was a decision we made collectively, but after that, the decision to sell him and to use that money to buy another player wasn’t mine.
"But even if it was, in football we make mistakes a lot of times, so many times some players develop in way we were not expecting, some other don’t reach another level like we thought they would, so I don’t even think this is a mistake, it is just part of the job.
"But effectively I did buy Salah, I didn’t sell Salah, but it doesn’t matter. What matters is that he is a fantastic player, and I am really happy for everything that is happening for him and especially because he scores against everyone and he didn’t score against us in two games."
Salah is now being tipped to end Cristiano Ronaldo and Lionel Messi’s duopoly of the Ballon d’Or, with Mourinho admitting he has been impressed by his performances.
"I think everything has surprised even him. It has been fantastic," Mourinho added. "But he is a great player that has reached the peak of maturity, he has already lived several other experiences and now has fitted perfectly into the style of play of the team, of the coach and of the club as well."
Liverpool are third in the Premier League and on the verge of the Champions League final, despite conceding two late goals to Roma in a 5-2 drubbing at Anfield in midweek.
--Advertisements--