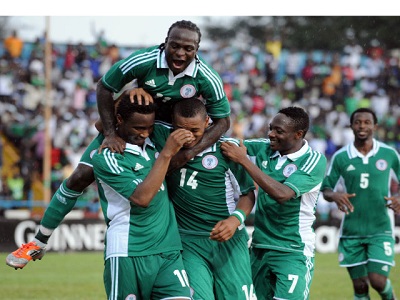 File Ptuneo
Chelsea star Victor Moses and Arsenal forward Alex Iwobi will join Leicester City hitman Kelechi Iheanacho upfront as the Super Eagles of Nigeria tackle Poland tonight in a friendly match.
It has been gathhered that Head coach Gernot Rohr who opted for a 4-2-3-1 formation handed China-based Odion Ighalo the job of leading the line upfront.
Joel Chukwuma Obi also gets a starting berth on his return to the national team fold.
The Ttuneo midfielder almost missed the call up due to an injury at club level but has sufficiently proved his fitness in training, enough to displace vice-captain Ogenyi Onazi from the starting lineup.
Apart from Obi, two players who made their debuts in the Super Eagles’ last outing, a friendly win over Argentina in November; Brian Idowu and goalkeeper Francis Uzoho will also make their full debuts for the team.
The famed ‘Oyibo Wall’ will continue their partnership at the heart of the defence with William Troost-Ekong named as the captain for the night with his club mate, Shehu Abdullahi getting the nod at right back.
Tonight’s game billed for the Stadion Miejski in Wroclaw will kickoff at 8:45pm Nigerian time.
Eagles lineup:
Uzoho; Shehu Troost-Ekong, Balogun, Idowu; Ndidi, Joel Obi; Moses, Iheanacho, Iwobi; Ighalo.
--Advertisements--