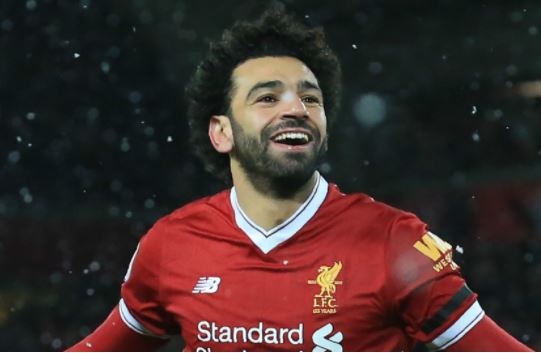 Mohamed Salah
Liverpool’s Mohamed Salah can win the 2018 Ballon d’Or, according to African football legend Emmanuel Amuneke.
A magnificent season has seen the Egypt international score 29 goals in 31 appearances to tie with Barcelona’s Lionel Messi in the race for Europe’s Golden Shoe.
The 25-year-old won his fourth PFA Player of the Month prize this season and was named Champions League Player of the Week, with his roll of honour seeing him draw comparisons to the Argentine superstar and Cristiano Ronaldo.
And Amuneke – winner of the African Player of the Year in 1994 – believes Salah has stood out enough to earn the individual accolade.
“Why not? Already, he is being compared to Messi and Ronaldo,” Amuneke told Goal during LaLiga’s unveiling of their Nigerian office.
“And I believe that those that are comparing him have gone through to check statistically.
“If it pleases God, he can win it and that will be good for Africa. The last person that won it was George Weah and if someone else from Africa can win it, then it’s a blessing and it shows that our [African] players are really growing.”
Aside from leading the Premier League sctuneg chart, Salah has plundered eight Champions League goals so far, taking his tally this season to 38 across all competitions.
The former Barcelona star also claims the forward’s commitment has elevated his status and charges African players to follow in the Egyptian’s footsteps.
“I think it’s hard work, patience, dedication and commitment,” he continued.
“When you look at his journey, you will realise that this player was signed by Chelsea and was loaned to AS Roma, and he is back to England.
“For now, he is so outstanding. Sometimes, when you have God’s favour whatever you do turns into gold. This is what is exactly happening to Salah.
“He is a good player and he deserves whatever he is achieving now. There is nothing like commitment, hard work, discipline and waiting at the right time. This is what [African] players need.
“Everyone in life has his journey and you must learn to wait for your journey at the right time. And when it comes, things will fix itself in the right direction.”
--Advertisements--