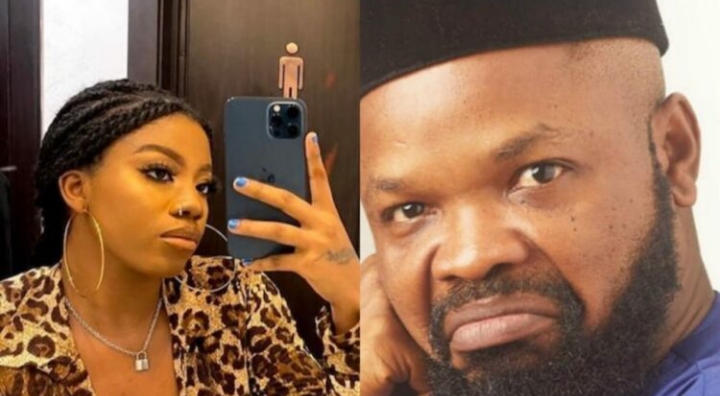 Ex-BBNaija female housemate, Angel Smith has lashed out at  popular media personality and actor Nedu Wazobia.
This comes after Nedu said most of BBNaija girls have nothing to offer except their bodies.
According to Nedu, most girls who appear on the show do so in order to get ‘customers.’
Angel Smith via her Twitter account has reacted to allegations on female BB Naija female housemates by Nedu.
She noted that his allegations are all old and boring.
As against Nedu’s submission, she stated that BBNaija Show has brought them (female housemates) to limelight, as they are doing great with their lives.
“This is all so old and boring, I don’t know why men can’t just mind their business. So many women have come out of big brother to become actresses, start businesses and actually have a solid brand but because y’all are so misogynistic and uninformed you say rubbish.”
Every time it’s a man in the industry slutshaming women, you’re over 40, if you want a sugar daddy then maybe get one, nobody is stopping you.
Look how happily he’s saying it. You people will shame women for having consensual sex and be surprised when men sexually assault women. Toto plaintiff, box patrollers, the coochie constables.
Men are very jealous of women because I don’t understand why you’re upset about a grown woman’s vagina. That’s why blogs thrive on bringing down the women in big brother, some of the most hardworking people I’ve met, especially the ones you guys slutshame a lot, shut up losers.
Like this topic pisses me off so much, then you people will come online and say “Nawa o, so she fucks for money and she’s oppressing us, don’t believe everything on social media” nobody is oppressing you my dear, you’re just a jealous rat.” she tweeted.