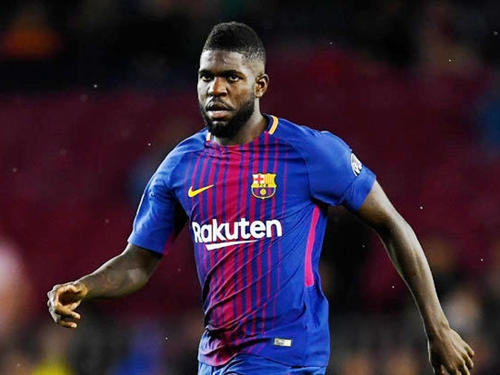 Samuel Umtiti
Manchester United are closing in on the signing of Samuel Umiti as Barcelona refuse to meet his demands, according to The Sun UK reports.
The French defender has developed into an integral player alongside Gerard Pique at at the back.
And Barcelona see him as an important part of their bid to rejuvenate their starting line-up moving forward.
However, Sport report they are unwilling to meet his demands of becoming the club’s second-best paid at the club behind Lionel Messi.
Umtiti, 24, wants parity with the likes of Luis Suarez and Andres Iniesta in terms of wages, but the board cannot justify that.
United, meanwhile, would be willing to meet his £52million buy-out clause and pay him £175,000-a-week.
Barcelona are growing increasingly concerned they are fighting a losing battle to keep the defender — and are unhappy with his brother and representative Yannick Umtiti’s stance.
Normally, the Nou Camp giants begin contract negotiations with their players two years before their current deal is due to expire.
Umtiti’s runs out in 2021, meaning Barca wouldn’t be looking to begin talks until the end of next season.
However, with his buy-out clause now deemed "reasonable" in the current market, they have been forced to act sooner than anticipated.
--Advertisements--