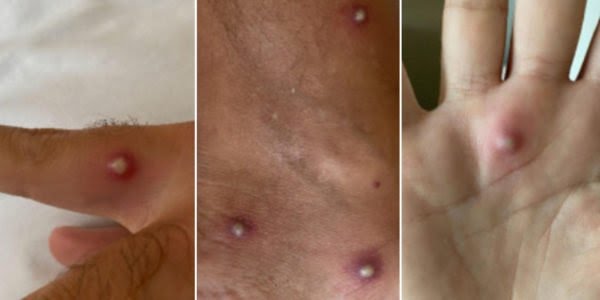 An Italian man has become the first person to simultaneously test positive for monkeypox, Covid, and HIV following his trip to Spain.

A report from Newsweek revealed that earlier this year, a 36-year-old Italian male started developing a series of symptoms including fatigue, fever, and a sore throat nine days after returning from a trip to Spain.

The patient’s identity is not disclosed by the report said he spent five days in Spain from 16 to 20 June 2022 during which he confessed to having unprotected sex with men.

On July 2, the man tested positive for coronavirus, according to a case study report published in the Journal of Infection.

That same day in the afternoon, a rash began to develop on his left arm. The following day, small, painful vesicles surrounded by a rash appeared on the man’s torso, lower limbs, face, and glutes.

Three days later, the vesicles had further spread and evolved into pustules – small bumps on the skin at which point the man went to the emergency department at the San Marco University Hospital in Catania, Italy Italy, and was subsequently transferred to the Infectious Diseases Unit.

There, he was tested for monkeypox and subsequently returned a positive result.

The patient was also screened for multiple sexually transmitted infections (STIs). He tested positive for Human Immunodeficiency virus (HIV-1), and the researchers said that ‘given his preserved CD4 count, we could assume that the infection was relatively recent.’

The patient had taken an HIV test in September 2021 and returned a negative result. After recovering from COVID-19 and monkeypox, the patient was discharged from hospital on July 11 and sent home to isolate.