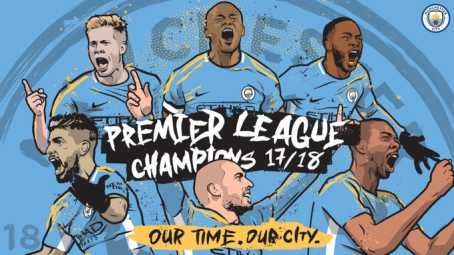 Manchester City have been crowned Premier League champions after local rivals Manchester United slipped up at home to WestBrom.

And they will have been hoping to wrap it up next Sunday when they take on relegation-threatened Swansea, with United having been expected to steam roll bottom-of-the-table West Brom on Sunday afternoon.

United failed to make a breakthrough against the Baggies at Old Trafford though and they counted the cost when Jay Rodriguez nodded a winner in the second half.

United’s defeat meant City had an unassailably lead at the top of the Premier League and Pep Guardiola’s men have been crowned champions as a result.

The irony of United handing the title to City will not be lost on the Old Trafford or Etihad faithfuls given goings on in the Manchester Derby last week.

City had the opportunity to secure Premier League glory at the Etihad had they beaten United and went 2-0 via Vincent Kompany and Gundogan’s goals.

But they blew that lead in the second half as Paul Pogba bagged twice and Chris Smalling fired a winner to claim an unlikely comeback victory.

City have the opportunity to break the100-point barrier with five games to come against Swansea, West Ham, Huddersfield, Brighton and Southampton.

And they could surpass Chelsea’s record goal-haul of 103 if they strike 11 more times in that set of fixtures against bottom-half sides.