Nigerians have taken to social media to react to a post of a member of the National Youth Service Corp (NYSC) invigilating an exam for military officers.

Naija PR took to Twitter and shared a photo of a male corp member taking on the role of an invigilator while soldiers were writing an exam.

The date and location of the said examination, was however not disclosed, so it is unclear how recently the photo was taken.

The young man could be seen holding a big envelope which probably contains the exam questions and answer booklets. 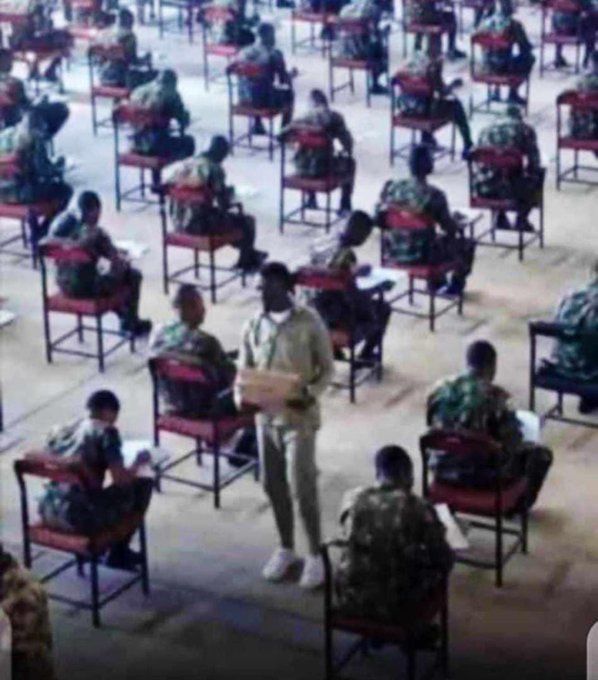 He maintained a position that suggested he was walking round the exam hall and keeping a close eye on the officers who wore their official uniform.

Sharing the image, Naija PR wrote; ”Can your PPA ever?”

It sparked a plethora of comments from Nigerians on the microblogging platform, most of which were hilarious.

Can your PPA ever??😭😭😂 pic.twitter.com/OX6EcnYXxt

@seyi_ajisafe wrote; Let’s paint a scenario where u catch one of d Officer discussing with another, will you tell him or her to stand up or collect his paper🤣🤣😂😂😂

@Whyzer_g; Caption “If you talk you go collect”

@buchiking2; Reminds me of my industrial training at Nigeria Law school Abuja🤣🤣 see where lawyers Dey beg to do malpractice I no gree.i said Oga if you do malpractice here how you wan take defend me for court tomorrow.e sweet me die.

@isaac_tarib; Serving in a military establishment is the best thing that can happen to a corper.

@drjeff60; I served at NDA and we do help in marking their exam papers. These guys only know the military skills but when it comes to academics just forget it.

@wambai17; I think is a matter of discipline, (from the Military guys or Cardets) and a courage (from the Invigilator). Know that once you are in that Gate called NDA there is Seniority and discipline. The man there, is standing on someone’s command, May be the Commandant

@OLADIwelt; If I see that soldier that play begle lasan him done fail aswear

@Sir_Willoh; This ain’t war front, so no issues. Nice one

@theMark247; If I dey this kind PPA if u mistakenly look side I’m telling u to stand up for 20 minutes, if u talk to someone I’m collecting ur paper. My wickedness go dey hyper here I swr.

The server is temporarily unable to service your request due to maintenance downtime or capacity problems. Please try again later.

Additionally, a 503 Service Unavailable error was encountered while trying to use an ErrorDocument to handle the request.