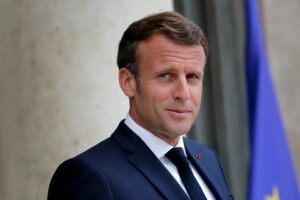 Emmanuel Macron has made history after being re-elected for a second term as French president.

He becomes the first president in 20 years to win re-election after defeating his far-right rival, Marine Le Pen, on Sunday.

According to Reuters, cheers of joy erupted as the results appeared on a giant screen at the Champ de Mars park at the foot of the Eiffel tower, where Macron supporters waved French and EU flags. People hugged each other and chanted “Macron”.

Macron will join a small club – only two French presidents before him have managed to secure a second term.

But his margin of victory looks to be tighter than when he first beat Le Pen in 2017, underlining how many French remain unimpressed with him and his domestic record.