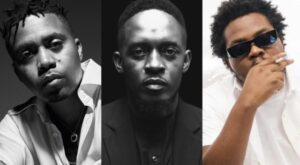 Nigerian ace rapper and songwriter, Jude Abaga, popularly known as M.I. Abaga (now known as The Guy), is set to release another album and the potential track list has surfaced.

The award-winning rapper and music executive recently changed his stage name from MI Abaga to ‘The Guy’ and, as a build-up to his self-titled upcoming album titled ’The Guy’, the rapper has released a song titled ‘The Guy’.

In a now-rectified error, the featured artists on the 12-track project were revealed on Apple Music with names like Nas, Olamide, Jesse Jagz, Wande Coal, Ice Prince, Duncan Mighty, BNXN (fka Buju), and others appearing on the tracklist.

Recall that M.I Abaga, sometime in 2017, sued American rapper Nas for allegedly collecting $50,000 from him for a verse without coming through.

Interestingly, Nas is one of the rappers expected on the ‘The Guy’ album on the third track on the album alongside Nigerian ace rapper Olamide.

See the tracklist below: 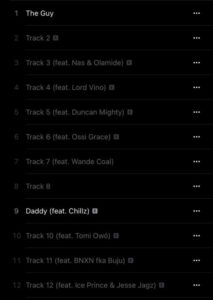