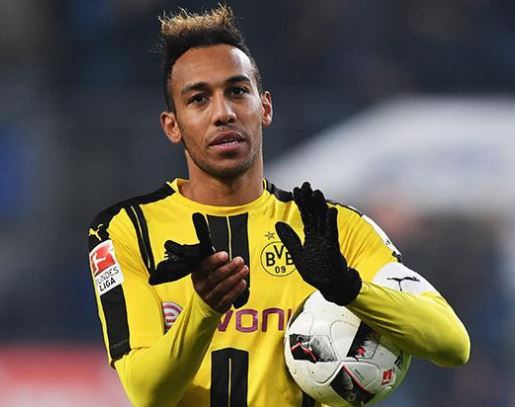 Pierre-Emerick Aubameyang
Liverpool have entered the race to sign Borussia Dortmund striker Pierre-Emerick Aubameyang, according to the bookies.
The forward has angered officials at the Bundesliga club and could be sold this month. Aubameyang is odds-on to join a club in the Chinese Super League but the Reds could now hijack any deal. Liverpool have money to spend after letting Philippe Coutinho join Barcelona in a £142m earlier this week.
And the bookies think Jurgen Klopp could bring Aubameyang to Anfield with some of that money. BetStars Director of Trading Ian Marmion said: “Borussia Dortmund’s out-of-favour striker Pierre-Emerick Aubameyang has been linked with a lucrative switch to the Chinese Super League, with the 28-year-old priced at 4/6 to sign for any Chinese club.
“However, that deal could be off as Liverpool have now entered the fray to hijack the big-money move after targeting the African attacker as a potential replacement for Philippe Coutinho.
“The prolific goal getter played under Jurgen Klopp at Dortmund and The Reds are priced at 3/1 to make a swoop for the Gabon international.
“Chelsea and Arsenal have also touted the Dortmund striker as a possible candidate to bolster their attacking options and both London clubs are priced at 6/1, while Real Madrid are valued at 9/1 to bring Aubameyang to the Bernabeu.”
Aubameyang has scored 21 goals in 23 appearances in all competitions so far this season.
Liverpool return to action this weekend when they take on Premier League leaders Manchester City at Anfield. The Reds have also been linked with Riyad Mahrez and Thomas Lemar as possible replacements for Coutinho this month.
And Klopp is trying to push forward the club’s deal for RB Leipzig star Naby Keita as well.
--Advertisements--