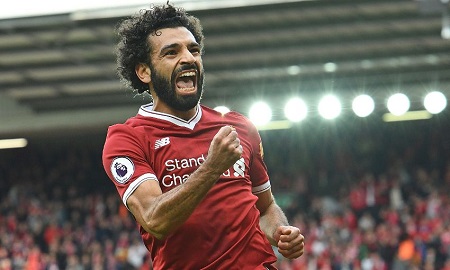 Mohamed Salah
Liverpool’s Mohamed Salah has assured club manager Juergen Klopp he’s “all fine, all good’’ after picking up an injury during the club’s UEFA Champions League clash with Manchester City on Wednesday.
But Klopp admits he is concerned over the fitness of his leading goalscorer after he limped off seven minutes after the interval at Anfield on Wednesday.
This was after the Egyptian had scored the opening goal in Liverpool’s 3-0 win over Pep Guardiola’s side in the first leg of the quarter-final.
Klopp confirmed the 25-year-old, who has scored 38 goals for Liverpool in all competitions this season, will be assessed in the coming days.
This is ahead of their English Premier League clash against local rivals Everton at Goodison Park.
“About Mo, I don’t know at the moment,” Klopp told reporters. “He came to the sideline and said he feels sometimes, something. That was enough for me to not even ask the doctor how he was. So, we immediately took him off the pitch.
“After the game I asked him and he said, ‘I will be good, it will be fine’. But now we have to wait for the real diagnosis, not Mo’s self-diagnosis.”
Liverpool will defend their three-goal advantage against Manchester City in the return leg at the Etihad Stadium on Tuesday.
-Reuters
--Advertisements--