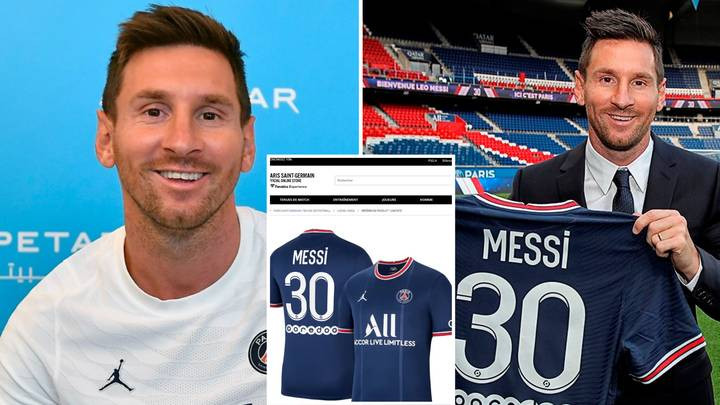 After signing for Paris Saint-Germain, Lionel Messi’s shirt has sold out just after 30 minutes.

Recall that the club announced the sale of the jersey on its online store after his signing was made official.

The six-time Ballon d’Or winner arrived in Paris on Tuesday August 10 for his medical, ahead of completing his sensational free transfer to the Ligue 1 side. Messi who was welcomed like royalty when he arrived the French capital, greeting a delighted multitude who gathered for him as if he was a king.will be paid €35m net per season including add-ons.

PSG released the official unveiling video at around 21:15 GMT.

Messi will be wearing the number 30, the number he wore first at Barcelona, which will allow Neymar keep his number 10 – Messi’s number at former club, Barcelona.

Norwegian/Moroccan journalist, Jonas Adnan Giaever tweeted that Messi’s new shirt was sold out on PSG’s official online store by 21:45, remarkably just a half-hour after his signature was made official.

Messi appeared at an emotional farewell Barcelona conference on Sunday August 8, before he received a formal contract offer from PSG. He is now PSG’s highest-paid player, ahead of Neymar and Kylian Mbappe.