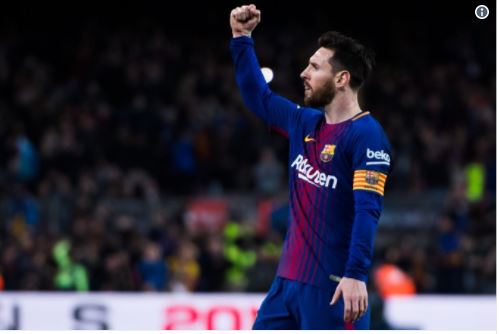 Lionel Messi
Lionel Messi set another record in his glittering Barcelona career after becoming the first player to score 30 goals or more in seven different seasons in La Liga.
The Argentine superstar reached the milestone for the 2017-18 season by sctuneg a hat-trick at the Riazor as Ernesto Valverde’s wrapped up the title with a 4-2 win.
His 30th goal of the campaign arrived on 38 minutes when Luis Suarez crossed to the far post and Messi was in prime position to volley home to give Barca a 2-0 lead after Philippe Coutinho had scored an early opener.
Messi then had to settle any Barca nerves inside the final 10 minutes after Depor pulled the game back to 2-2 following goals from Lucas Perez and Emre Colak.
With eight minutes to go, Messi restored Barca’s lead after being teed up by Suarez again, and the pair combined for a third time in the match on 87 minutes to allow the five-time Ballon d’Or winner the chance to complete his hat-trick.
The treble in the Riazor also took Messi ahead of Mohamed Salah in the race to win the Golden Shoe as he is now on 32 league goals for the season, compared to the Liverpool forward’s tally of 31.
The first time Messi struck 30 goals in a season in La Liga was during the 2009-10 campaign and he passed that milestone again in the following three years.
In 2011-12, Messi struck an incredible 50 goals in La Liga and came close to repeating the feat in 2012-13 when he netted 46 times.
He just missed out on the 30-goal mark in 2013-14, but was back averaging more than a goal per game in La Liga in 2014-15 when he rattled in 43 goals in 38 appearances.
Last season, the 30-year-old netted 37 goals in 32 outings in the league and he has now reached the 30-goal mark again with his effort against Deportivo.
It should perhaps come as no surprise that Messi was on the scoresheet at the Riazor as it is now his favourite ground to score at after going past his Santiago Bernabeu tally.
In total, Messi has netted 13 goals at Deportivo’s home – two more than the number he has scored at the home of Barca’s arch-rivals Real Madrid.
Barcelona, who have yet to lose in La Liga this season, went into the game knowing that a draw would be enough to secure the league title, but they confirmed their status as champions in style thanks to the irrepressible Messi.
--Advertisements--