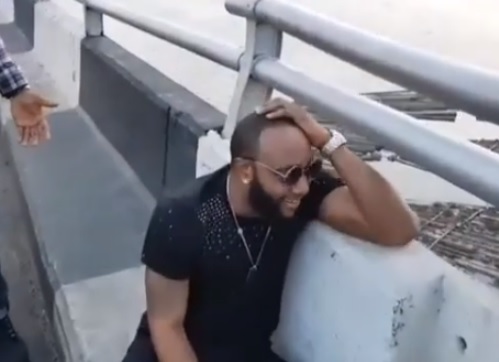 KCee at the 3rd mainland bridge
Nigerian singer and songwriter, Kingsley Chinweike Okonkwo, popularly known as KCee has reacted to President Buhari’s speech at the Commonwealth where he described the Nigerian youths as be ‘being Lazy’.
In a Video which was posted online and is making the rounds on social media, KCee who currently has a record deal with Five Star Music, was seen as he parked his gold coloured SUV on 3rd Mainland Bridge in Lagos and went on a one minute rant of how unacceptable President Buhari’s comment is.
In a continued show of his disapproval of the President’s comment, KCee then attempted (as a joke) to jump off the bridge, while lamenting how the Nigerian youth has always found a way to make it in their various fields and professions without any help from the government.
Watch the Video below;