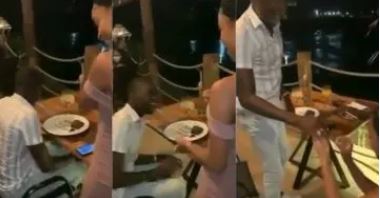 A young lady decided to take the bold step by asking her boyfriend to marry her.

The lady who appeared in a viral video took her boyfriend to an expensive restaurant and proposed in a romantic way.

In a video making the rounds on social media platforms, the lady decided to arrange the surprise proposal with the staff of the restaurant.

They brought a covered plate which the man believed contained food, but as he opened it he saw the words; ”Will You Marry Me” written neatly in it.

He was excited and shocked as he remained in his seat laughing and clapping before standing up.

The young man stretched out his finger as his girlfriend got on her knees and put the ring in his finger while people clapped and cheered.