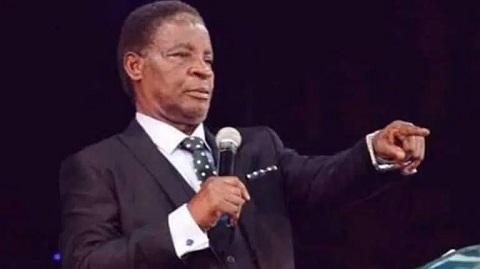 The founder of Solid Rock Kingdom Church, Apostle John Okoriko has shared his experience in the hands of kidnappers after his release.

According to him, the kidnappers before releasing him, knelt down and asked him to pray for them, DailyTrust reported.

Recall that the pastor was whisked away from his house by some gunmen in April 2022.

It was gathered that the terrorists had stormed the cleric’s residence in Mkpat Enin Local Government Area of the state and abducted him while he was resting.

Subsequently, they reached out to his family and church members to demand an initial payment of N100 million as ransom.

Okoriko who has now regained his freedom narrated his awful experiences with the terrorists.

According to him, the terrorists that abducted him are numbering about five.

Okoriko told his followers that two among his abductors knelt before him to seek prayers before he was allowed to go.

He said: “The torture was much. They did terrible things to my body to force me to bring money to them. I told them I have not seen such money in my entire life.

“They told me I am the richest pastor in Akwa Ibom. They did all manner of things to me. Out of the five-man gang that abducted me, two of them knelt and asked me to pray for them before they released me in the evening to go,” Okoriko revealed.

Apostle Okoriko commended the former Chairman of the State Christian Association of Nigeria (CAN), Prelate Emeritus of Methodist Church, Sunday Mbang, and founder of Believers Assembly, Apostle Isaiah Isong, for their roles in ensuring his release.

He said the duo set up a team of people who gathered to pray for him.

Okoriko said after his release, he first visited the capital ground of his church because it was close to the kidnapper’s den, and Prelate Sunday Mbang, the next morning, following the dream he had about Mbang.

He said, “That night, I saw my father who died in 1990 sitting in place as a court session with great men and women. When he talked to me, he turned to Prelate Sunday Mbang.

“In the morning, I showed myself to Prelate Mbang and prostrated before him and told him my experiences. Quoting the scripture from Psalm 129: 2, I told him that from my youth, people have attacked me but they never prevailed over me.”