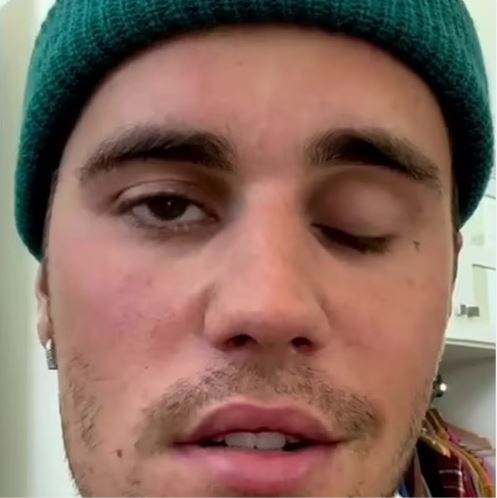 Justin Bieber, the world-famous Canadian singer, has revealed he is experiencing paralysis on his face after being diagnosed with a rare disorder known as Ramsay Hunt Syndrome.

Taking to his Instagram page on Friday, the singer asked his fans to keep him in prayers as he explained in a three-minute video how the paralysis was really affecting his face and how it had led to the cancellation of some of his shows.

Ramsay Hunt Syndrome is a complication of shingles that occurs when an outbreak impacts the facial nerve near one ear. In addition to facial paralysis, it can cause hearing loss.

“I wanted to update you guys on what’s been going on. Obviously, as you can probably see from my face, I have a syndrome called Ramsay Hunt syndrome and it is from this virus that attacks the nerve in my ear and my facial nerves and has caused my face to have paralysis,” the 28-year-old pop star said.

Fans have taken to his comment section to wish him well.

“So for those who are frustrated by my cancellations of the next shows, I’m just physically obviously not capable of doing them. This is pretty serious as you can see. I wish this wasn’t the case, but obviously my body’s telling me I gotta slow down,” he continued.

The “Peaches” singer had announced Wednesday that he would be postponing a few shows from his ongoing Justice World Tour due to a health issue that was yet to be known then.

With some time off from the tour, scheduled to run through March 2023, Bieber told fans on Friday that he plans to “just rest and relax” so that he can “get back to 100 percent.”

“Love you and proud of you,” wrote Bieber’s longtime manager Scooter Braun, while Kehlani added, “love you dude, please take all the time you need!!”