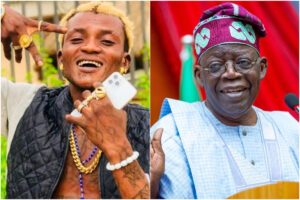 Portable Omolalomi, a well-known Afrobeat performer says that APC Presidential candidate Tinubu Bola has paid him to endorse him.

Artist Portable also known as Zazu made this known in a video he shared on his page yesterday, July 13th. The artist has previously disclosed in the past that he was paid to insult the now APC presidential candidate but it seems the tables have turned.

Social media users lambasted the Zazu crooner after a video of him popped up the previous week where he was campaigning for the political candidate. In a video posted on his Instagram page, the Zazuu crooner also asked Nigerians to vote for Tinubu in the 2023 presidential election.

In a new video, the artist has disclosed that he has been paid by the candidate to campaign for him.

“If they pay you money, you have to work. I was once paid to insult Tinubu during the protests. That was a long time ago. Now, APC has said Akoi Tinubu.

“If they pay you, do your job, no ripping. When I was asked to insult Tinubu, I collected my money and did my job. Now Tinubu is the next. They’re the ones that gave me money, and I must do the work for the money I collected. Akoi APC,” he said in Yoruba.