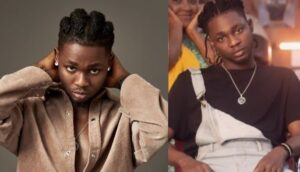 Nigerian singer, Stanley Omah Didia, popularly known as Omah Lay, has revealed that he’s been going through some tough times.

In a video message he posted online, Omah said that over the past few months he has been through a lot but there are a group that stayed with him during the period.

The ‘Understand’ crooner said he specifically recorded the clip to acknowledge them and express gratitude for all the support.

Omah Lay became emotional while talking as tears started building up in his eyes, before he declared that he loves those who have been there for him.