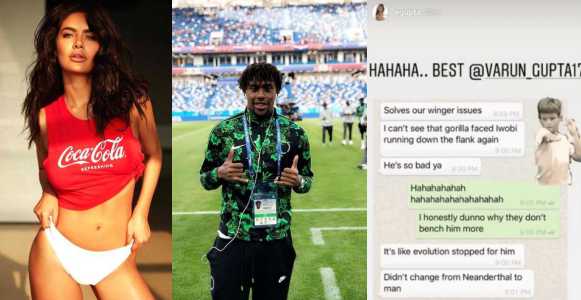 Gupta called Iwobi a gorilla
Indian actress, Esha Gupta, who is an Arsenal ambassador, has issued an apology on Twitter after she found herself at the receiving end of massive backlash on social media, following her comments on Arsenal and Nigerian footballer, Alex Iwobi.
“Guys, I’m sorry you thought it was racist. Was bad on my part, being a sports lover. Wallah never meant it. Sorry, guys forgive the stupidity,” read one of her tweets while in another, she added: “I didn’t realise it directed towards racism.”
But “apology unaccepted” appears to be the general sentiment on Twitter. Earlier, Esha Gupta shared a screenshot of her WhatsApp conversation with a friend, which referred to Iwobi in offensive terms such as “gorilla faced” and “Neanderthal.”
In response, Esha herself wrote: “I honestly don’t know why they don’t bench him more.” In another tweet, Esha Gupta claimed she was simply venting out her “frustration” over Arsenal’s 1-3 defeat to Manchestar United in a recent game.
“It was us discussing our frustration during the game. Sorry, as I didn’t realise it directed towards racism. Laughed over the spur of the moment, which was the games result, guys. Been victim of racism myself before. But this is not something I’m proud of. It was a fault, sorry, guys,” she tweeted.