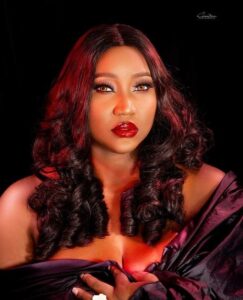 Judy Austin, a Nollywood actress and second wife of Yul Edochie has declared herself the ‘happiest girl’.

The comes weeks following the backlash that trailed the thespian for ruining Yul Edochie’s home with his first wife.

Taking to Instagram, Judy Austin affirmed the kind of diet she has been on; one she referred to as straight energy while declaring herself the happiest girl ever.