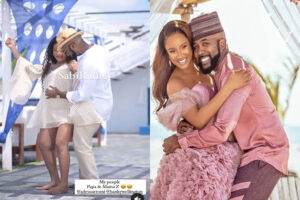 Popular Nollywood actress, Adesua Etomi-Wellington, has showered her husband, Banky W, with affection while expressing her gratitude for his commitment to her.

“So grateful to be loved by this man @bankywellington. You, my darling are spectacular,” she wrote. 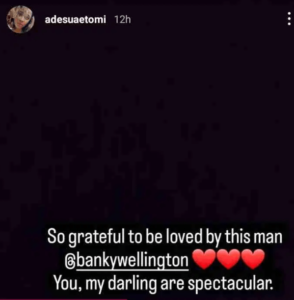 Speaking in an interview, Banky W recounted the pain and stress his wife, Adesua had to endure while undergoing In Vitro Fertilization(IVF) just to be able to bare their first child but in the process lost their twins.

“2019 was a tough moment and a seminal moment in my life because that was the year that we were running for office and at the same time my wife and I were struggling to have our first child”, he said.

Banky W explained that his wife was going through so much physical pain during the process and he on the other hand was being pulled and drained of energy due to his numerous business ventures and works.

We started doing IVF treatment in fact we have done our second one and as you know it is a very difficult process, especially for the woman and it even becomes even difficult for the man because you don’t know how to help because you see her body go through pain and difficulty”, he added.

In view of this, the prominent singer described his lovely wife as the most amazing woman on earth given the fact that she hard she prevailed through her woes in 2019 when they tried having their own child.