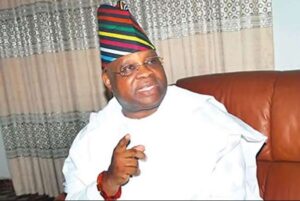 Senator Ademola Adekele, the Governor-elect of Osun State, has made a promise to the people.

He promised the people of the state that he is prepared to serve.

He said he was aware of the several challenges facing the state but that he would tackle them head-on.

Adeleke, who was the candidate of the Peoples Democratic Party, defeated the incumbent governor and candidate of the All Progressives Congress, Adegboyega Oyetola, to emerge as the winner of the July 16 election.

According to the Independent National Electoral Commission, Adeleke scored 403,371 votes and won in 17 local government areas to defeat Oyetola, who scored 375,027 votes and won in 13 LGAs. No fewer than 15 political parties participated in the election.

In an interview with Saturday PUNCH, Adeleke, who received his Certificate of Return from the INEC on Wednesday, said, “My election by the good people of Osun State is divine. I am prepared to govern. I am also not unaware of the many challenges facing the people of our state. I want to assure you and the people of our dear state that I won’t disappoint them.

“I have the capacity to lead the state and I will do it with the fear of God. I shall provide the needed leadership. I have learnt a lot within the last four years when our first mandate was stolen.

“I promise not to disappoint the people. We shall prioritise our needs and I can assure you that the needs of the people shall be our priority. Osun people have suffered enough, they need to smile and laugh like their counterparts in other states that are working. We shall make that possible.”