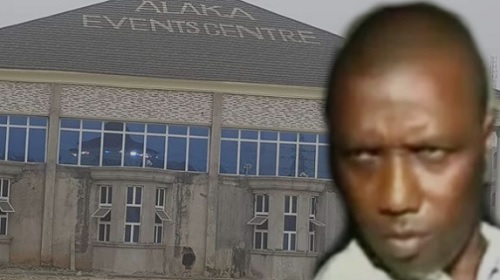 Alaka Abayomi
Highly publicisized Badoo kingpin, Alhaji Alaka Abayomi, who had been declared wanted by the Lagos State Police Command, has said he is ready to submit himself to the Nigeria Police Force for investigations.
Accordingto PUNCH, Alaka who disclosed further that he would not appear before the state Commissioner of Police, Edgal Imohimi, alleged that investigations would be compromised if carried out under Imohimi’s supervision, urging the Force headquarters in Abuja to take up the matter.
While speaking on Wednesday on the heels of the arrest of a herbalist, Fatai Adebayo, who allegedly administered oaths on Badoo members before they went on operations.
On Wednesday, the Lagos State Government also sealed off Alaka’s filling station and tuneel on Ijebu-Ode-Itoikin Road, in the Sabo area of Ikorodu, saying the facilities violated the state’s Urban and Regional Planning Law of 2010.
Alaka, in a telephone interview with our correspondent, said he was not apprehended and challenged the police to come up with evidence against him. He was, however, evasive when asked where exactly he was.
The embattled businessman, who spoke in Yoruba, said, “What evidence did the police have before calling me Badoo (kingpin)? Did any suspect mention my name? What does sealing my property have to do with this case? I applied and paid for the Certificate of Occupancy for the filling station five years ago, but I have not got it. I have evidence of payments.
“Since the police declared me wanted, no policeman came to my house or office to invite me. The police have my number, but they did not call me on the telephone for invitation. I don’t believe I am wanted because no invitation was sent to me. Since the police said they were looking for Badoo members, they have not arrested any prime suspect.
“I want the government to intervene. I am ready to appear before the police or any investigative body, but not before the Lagos State Police Command and Edgal (Imohimi). A team should be set up to investigate the matter, particularly from Abuja. He (Edgal) declared me a Badoo kingpin, but what evidence does he have? About five security men guarding the filling station have been arrested.”
Alaka explained further that he had sued the police command and Imohimi at the Federal High Court, Ikoyi, for blackmail, but the respondents had yet to appeared before the court.
He alleged that the court had also delayed ruling on an injunction application filed by his lawyer, seeking that the police be restrained from arresting him (Alaka) pending the determination of the substantive suit – blackmail.
The 51-year-old claimed that his issues with the police started when he declined to pay N10m bribe an Investigating Police Officer reportedly demanded from him.
He said, “I can no longer walk freely around Ikorodu for fear of area boys administering jungle justice on me. I have read about the herbalist that was arrested. I don’t know him. Why didn’t police allow him to talk to journalists? The case should be transferred from the Lagos State Command; they have dented my image. I sleep in my house in Magodo; no policeman came to arrest me.
“I will not show up at the Lagos State Police Command for three reasons: one, they don’t have evidence against me. I was arrested and released the following day without being told to write a statement.
“Secondly, the CP has refused to appear in court. The case has been in court since August 2017. For three adjourned dates, the court was said to be on vacation. During the last sitting, the judge adjourned till February 2018 for ruling on the injunction, which is very suspicious.
“Thirdly, I will not surrender myself to the CP because he will compromise investigation. But I am ready to appear before the Inspector-General of Police and the National Assembly.
“The genesis of this issue was when the IPO requested that I should pay N10m to settle some police officers at the command. It was when I refused to pay the money that I was arrested. I have petitioned the National Assembly and the IG on this.”
When contacted for reactions to the allegations made by the suspect, the Lagos State Police Public Relations, SP Chike Oti, said he had no comment.
He said, “I have no comment to make because the case is under investigation. Everything concerning the subject is under investigation. The command won’t bandy words with him. He is being wanted by the police and he should turn himself in.”
--Advertisements--