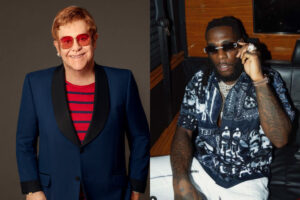 British singer, John Elton has recently revealed his intentions to work on a possible collaboration with the Nigerian Grammy award-winning singer, Burna Boy.

He made this known during a video call interview with Burna Boy, saying that he would love to work on a song with the “African Giant” crooner after he is done with his world tour.

Elton described Burna Boy’s music as “fantastic” and his tunes always gets people excited and intrigued, hence he wouldn’t mind working on a song with him after his world tour.

“Well, personally I would love to do one day, I would love to but I’m on a world tour at the moment but when things comes down, if you ever want to do a song with me, I’d be”, Elton told Burna Boy.

“You are the one artiste I’d really want to do something with because your music always makes me happy and it’s fantastic and it would be a honor for me to do that”, he added.

He also congratulated Burna Boy on all his previous and current successes in his music career and hopes to one day meet him for the collaboration.

However, Burna Boy also expressed his excitement and agreed to work with the renowned singer when he is finally done with his tour.