K-Solo and Buhari
Music producer, K-Solo has voiced his regrets for voting for Buhari in 2015.
The ace producer made this known via a series of tweets on Twitter where he lamented about the moribund state of the nation and how the President has not been able to make Nigerians happy since he took over in 2015.
He wrote:
"I REGRET THAT I VOTED FOR @MBuhari I thought with him things will be a lot different ,so much believed in him that I campaigned for him here and off here.
I knw it’s not only my vote that put him there, but my vote was counted for him and that’s a mistake I’ll forever live with.
EFCC – Magu NFIU- Hamman-Tukur Police- Mohammed DSS- Bichi NIA- Ahmed AGF – Malami Appeal Court – Bulkachuwa High Court – Abdul Kafarati Supreme Court – Tanko The entire judiciary is in the hands of a section of the country.
This is brazen. Nigerians How do you defend this? We have to wake up. Buhari may not even be on that Sit in 2023." 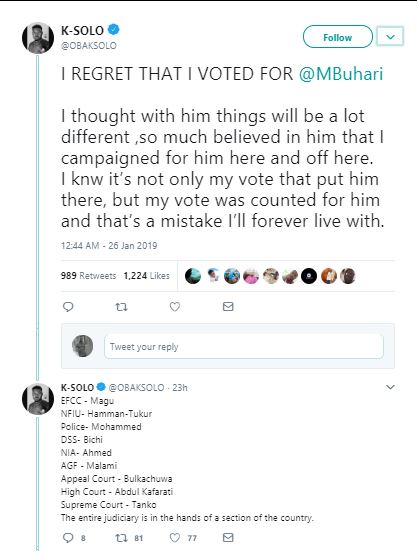 Each Time I Go Out, I Regret It – Angel