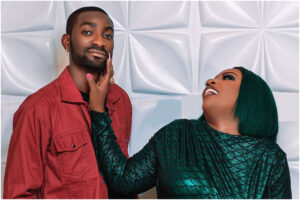 One of the interesting couples the industry has produced is the marriage between Anita Joseph and MC Fish. The couple shares their best lives with social media users and fans.

“I met her at a birthday party, I didn’t know she was an actress initially because I was working and busy at the time. I just saw a pretty lady and said hi what’s up? So the next day I checked her Instagram and saw that oh..”

Also disclosing why he married actress Anita Joseph, MC Fish disclosed that he married her because of the respect he has for her.

“It’s not about that (her popularity or status), she respects me and she makes me happy so I would do whatever she wants.”